When I’m swing trading [1], I prefer to place stop and target orders via bracket orders [2].  That means I’ve got pending orders which will cancel out the other side based upon what gets executed first. I’ve got a hard stop in place just in case of an adverse move in price, and I’ve got a limit order in case of a favorable move.

This set-it-and-forget-it style of trading works well for me on the multi-day timeframe.  First, I don’t need to watch every tick.  I can trust that my orders are doing the job for me, because generally those stop and target levels are several percentage points away.  Second, it helps to keep me from micro-managing trades.  I don’t get so consumed with the intraday chart that I abort my original game plan.  That’s good.

But when it comes to intraday plays, or day trades, I often times will take a slightly different approach by using a mental stop.  There are a few reasons for this:

1. I’m watching the price action closely and developing a feel for the move that’s taking place.  I will know the area where I’ll plan to exit the trade before getting in, but in the first few minutes I may not have a specific, hard number that I’m ready to commit to.  That’s simply part of tape reading on a trade that may only last minutes.

2. Because I’m watching the price action, by default I’m at the PC.  That means I’m able to blow out of the trade instantly when I realize the time has come that I’d rather have the cash than the shares.

3. Since my intraday timeframe is about minutes or hours, it’s often a bit tougher to continually place and cancel orders for the same trade as it progresses.  Ideally, the stock is moving in the intended direction and I’m eyeballing areas on the chart where I’ll need to book some gains or begin to lighten up (or even exit entirely).  Those levels change continually based upon the momentum of the stock, so I often times defer to sort of a “mental trailing stop” whenever that’s the case.

4. Fortunately, I’ve never struggled with blowing stops, so I can trust myself to bail on a trade when it’s time to.  And again, I know going into the trade the general area where I’ll get out, so even if that’s crossed right away then my decision is made.  My struggle generally lies with staying with big winners and allowing them to become huge winners, but that’s a topic for another discussion.

Which One is Right For You?

The answer to this depends on your personal style, and some real honesty [3] is required on your part with this one.  But it is rather simple. 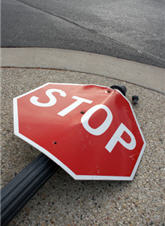 If your tendency is to blow mental stops, then set hard stops in your trading platform and leave them alone.  End of discussion. It’s for your own good.

If you prefer mental stops, insert support or resistance levels on your chart (literally draw them) so that you’ll at all times have a visual representation of where your trade stands and if the time to bail out is approaching. I often set red support levels and green resistance levels as sell and buy markers for trades. Whatever you do, be consistent [5] and don’t hesitate to kick that trade out the door [6] when it stops behaving.

Bottom line:  if you know deep down inside that you lack the discipline to cut a losing trade when the time comes, put a hard stop in place. And if your problem is simply staying in a winning trade when you know you should, consider scaling out [7] on the way up.