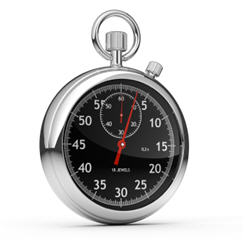 As a rule, no there is no specified timeframe which I refuse to trade.  However, it is always a good practice to pay attention to developing themes in how the market is moving.

For instance, (and this changes periodically, hence no hard-set rule), not long ago the market was in a bit of a routine of not doing much for the opening hour or so, and then finally we’d pick a direction and make a move. When I began to notice that, I’d get extremely picky with which trades I’d take in the opening hour. Once that routine changed and we started seeing cleaner moves right after the opening bell, I was again willing to trade whatever happened to be on the move.

Listen With Your Eyes

There are always timing themes you can pick up on if you watch closely.  An obvious one is that it’s common to see stocks get quiet around the east coast lunch hour as traders step away, so that’s a good time to stay pretty quiet with your trading.  Sometimes we’ll settle into routines of making big moves in the final 30-45 minutes of the day, offering some nice potential late in the session.

Just keeping a close eye on these kinds of things, or keeping a trading journal [1] will help you to identify common behaviors of the market and notice times to stay away or be more active.  Stocktickr [1] has a time of day feature which will tell you which times of day are best or worst for you, among many other stats it’s able to generate, which makes it a great tool to check out if you haven’t already.

One thing I’ve paid attention to lately is the rhythm of the market moves.  The market has been volatile and very reversal-prone, and yet there has been some order to it if you look a little closer.

Taking SPY as an example, we’ve seen several moves take place, both on the upside and downside, of similar duration and size in the past couple of months.

For these examples, I’ve counted the bar where a low or a high is set as bar 1, and have used the final bar of the move as my total.  In the chart below, we see from the flash-crash May 6th low, there was a 6-day bounce before a reversal kicked in.  And from the July 1st low, we’re now sitting on a 6-day bounce (through last Friday).

We’ve seen a pair of 9-day declines as well, starting from May 13th and ending on May 25th, and another from June 21st to July 1st.

Here’s a closer look for you:

Paying attention to the size, duration, and general rhythm of prices carries tremendous benefits to you as a trader.  Watching for chart patterns [3] is a great place to start, but don’t just stop there.  Study price moves closely, and see where it gets you.

What have you noticed lately?