August seems so long ago, doesn’t it?  Stocks had rebounded from their July lows, briefly, and had turned back down hard for a test.  The test passed, as an important higher low was established.

From there, we all know the story of how the seasonally-weak September and October stood conventional wisdom on its head to post big gains.  What’s not been spoken of much, however, is the way this 2-month rally has changed in recent weeks.

What began as a rip-roaring rise ripe with short-covering has evolved into a slower, more steady uptrend channel [1].  The pace has cooled off a bit, while still continuing to make upward progress.  In fact, new intraday highs were posted multiple times last week, despite the indecision we saw between the opening and closing bells each day.  Today we’re seeing more of the same, as early strength has delivered new highs while modest profit-taking has caused the indexes to back down from their best levels.

To put it another way, the “dumb money” has had great success in recent weeks.  Those who waited for strength to return before becoming confident enough to join in have been fortunate enough to chase extended markets and stocks and still profit.  But for those of us who prefer to see some kind of rhythm [2] associated with market moves, it’s been a one-way street without many ways to play the long side while still protecting the downside.

Astute traders have instead found it a bit more difficult to navigate the current environment, as anyone with an ounce of discipline has felt the uneasiness of adding long-sided exposure for overnights while simultaneously recognizing the limited opportunity of trading intraday.  It has left many of us to do more scalping while waiting for more lively day-to-day price action and higher-quality bases to come along.  Those bases often rely on some back-and-forth price action, which we simply haven’t seen of late. 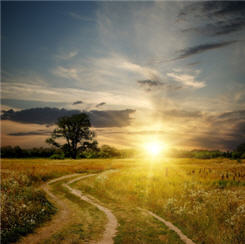 Any trader worth his salt knows that conditions will shift.  Maybe not immediately, but eventually.

That doesn’t mean prediction is necessary, because it isn’t [3], but it does mean staying alert.

When trading well, keep doing what works but be on the lookout for signs the setup may be changing.  When trading poorly, it’s imperative to employ some other methods which are more suitable to the conditions.  At the same time, hope can be had that a shake-up in the price action will bring more opportunities.

Right now, the market is in an interesting spot.  The rally has brought the spring highs into play as we’re essentially testing them in this area.  That’s a logical resistance area that could prompt some selling, depending upon the news flow.  The uptrend channels seen in the averages could easily be penetrated to the downside, heightening concerns of whether that’s the end of the run.  The other side of the coin is that the trend is still up, and no evidence has surfaced to suggest it’s changing.

So as a trader, here’s how I’m dealing with all this.  The trend is up, so I’m favoring the long side while keeping timeframes short in order to offset the risk of walking the highwire here.  I’m also mindful of potential shifts which could emerge anytime.  We’re in the midst of earnings season, and that could easily sour the mood.  We have the November elections tomorrow and the political implications of that, which is a major event.  And then mid-week we have the FOMC, and with all eyes on the economy, the attention of traders will definitely be on Wednesday’s announcement and policy statement.

We could ramp from here and take out the spring highs before a pullback begins.  It’s possible.  We could break the uptrend channels and see some selling accelerate as traders recognize the trend line break and move quickly to lock in profits.  Several scenarios are possible, and it’s important to keep an open mind here for that very reason.

I will say this:  I’m expecting volatility to pick up sooner than later, and that means more opportunities for trading multiple timeframes.  That’s where the real money is made, as you can have capital working for multi-day moves while still maneuvering to catch intraday moves for profits.  Look alive out there, this is no time to get lulled to sleep.