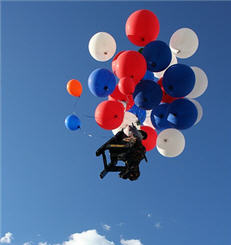 July 2, 1982 was a special day for Larry Walters.  That’s the day the truck driver strapped 45 helium-filled weather balloons to a patio chair armed with a six pack, sandwiches, a camera, and a pellet gun to pop the balloons.

His intention was to go up and look around, but he quickly found himself terrified, having dropped his pellet gun, and over 15,000 feet in the sky in the primary approach path for Long Beach Airport.

When asked why he did it, he simply replied “A man can’t just sit around.”

There are multiple occasions when sitting still is the right thing to do in trading.

Sitting still with regard to open positions that are working is definitely a time to be less active.  For instance, most of us are familiar with the quote attributed to legendary trader Jesse Livermore:

“It never was my thinking that made the big money for me. It always was my sitting. Got that? My sitting tight!”

Right now, we’re seeing yet another example of a time when sitting still is a worthwhile approach for traders having a timeframe outside of a couple hours.  Volatility is extreme, indecision is running high, and prices are ripping back and forth ’round the clock.

Stated otherwise, it’s really hard to manage risk effectively in a tape like this.  It’s a scalper’s dream, but if that’s not you, this is a time to sit still.  Let the dust settle, and be patient.  Big opportunities are going to result from this.

Do you just head for the couch and flip on the TV with a bag of Cheetos?  No!

Work on your game.  Clean out your watch lists.  Study your trades [1].  Read a great trading book [2]. Get inspired for greatness.  Practice Winning [3]. Do anything that will make you better.  But don’t just sit around.