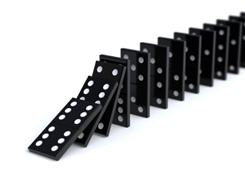 [1]
Perhaps the automatic buy button got disconnected somehow, but Wednesday’s decline marked the 3rd consecutive decline in as many days – something we’ve not seen since early March when this market caught fire for 9 very green weeks.

And although a 3-day losing streak is far from the worst thing this market could see, it begs the question of whether or not it’s the beginning of, um… a change of character.

Ok, a reversal, to put it bluntly.

After all, a pullback is going to happen eventually which lasts for a few weeks – not just a few days, and now might be just as good a time as any for that to happen.

Now, I’m not one to make big bold predictions, but some of you might recall that on the day of the low in March [2] – yes, 9 weeks ago – I showed you right here the “technical threat of a short-term reversal.” I wasn’t going out on a limb, just calling it as I saw it.

It turned out pretty well.

So here I am again, simply pointing out what I see.

And if this does prove to be the early portion of the first meaningful pullback we’ve seen since early March, it’s important to first recognize that it would be a healthy event.  The strongest markets do have pullbacks along the way, and that actually can help to perpetuate a trend.

Think of it like a rest – nobody can run nonstop forever, and the market is the same way.  Some time on the bench can be a good thing.

This question of whether conditions are shifting or not is at the forefront of the discussion right now.  Most individual stocks will take their cues from “the market,” which is developing a bit of a rolled-over appearance on the daily charts here, I might add.  Stated otherwise, it might play out to be more than merely a 3-day dip, with a pretty big if.  (See the caption on the chart below.)

3 Positives of a Pullback

And so it may very well be that a decent correction is finally starting here, which if it does, could serve to do a number of things – all of which are good.  Assuming we don’t go straight back to the March low, that is.  Here they are:

1. The widespread overbought conditions we’ve seen for the past several weeks can finally go away. That means when a bullish setup appears, it’s less likely to need a “stay away” sign in front of it for those of us who prefer to manage our risk accordingly.

2. Stocks should (once a good pullback is completed) be able to set up some new bases, patterns, and support zones for trading. While this might take more than just a few days, it’s ultimately great news – especially if your preferred timeframe is swing trading [4].  The stocks which have produced nothing but steady climbs without rest can finally pull back and establish some new support – like a higher low.  Combined with the higher highs we’ve already seen in recent weeks, that would keep the uptrend intact.

3. A meaningful pullback is going to help separate the men from the boys. During this run from the March lows, few stocks have failed to participate.  It’s almost like everybody’s doing it.  It seems virtually everything has joined in the rally, making it difficult to determine which stocks are merely being squeezed higher and which ones are developing into true, lasting leaders.  Separating the also-rans from real leadership should help to narrow our focus as traders, and give us higher quality plays on both sides of the tape.  That’s something we all stand to benefit from, whether bull or bear.

So in closing, let me just say I’m no perma-bear.  But don’t hate me if I’m rooting for a little more of a correction here.  It sure doesn’t have to last forever, and I think it’ll lead to much better things for those of us trading this market.