On several occasions in recent years, I’ve taken a spring trip with my dad and some friends to Arizona to play golf for a few days.  I love the desert, and it’s fun to spend some time with the guys and make a few birdies (let’s not talk about the bogeys!).

Around Scottsdale, and particularly to the north of town, it’s quite common to see single-engine planes buzzing around the skies.  Maybe it’s the great weather and silence of being on the golf course that made me notice them, but they seem to be everywhere.  They’re pilots in training, and they’re starting small before they work their way up to something larger (like perhaps, something with more than 1 engine!).  I respect that approach, and we’ll touch on that shortly. 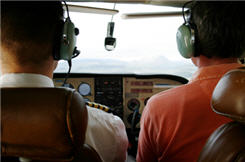 But one thing that really caught my attention is that they actually shut off their engines – on purpose – over and over.  What?  It’s one thing to hop in that little thing with what sounds like a lawnmower motor on it, but hey, it’s no glider.  Why would they do this intentionally?

They’re creating stall conditions and learning to recover.  Learning to purposely manage a malfunction in a controlled environment (well, partially) helps them avoid panic should it ever happen unannounced.  Eventually, they’ll become the kind of pilot I wouldn’t mind flying with.

From One Cockpit to Another

As a trader, sometimes that malfunction happens without warning.  Sometimes right after an entry is made, the position rips right against you, perhaps even before you’ve had time to place a stop.  Sometimes it’s an overnight trade which has unexpected or unscheduled news hit which causes the stock to gap against you, perhaps even beyond where you had intended to exit in the event of a failed trade.  It’s painful and shocking, and more often than not, it results in panic for the untrained trader.

So how do you deal?

It’s almost impossible to mimic the emotions that go along with such a situation, but here are a few simple things you and I can do in order to avoid panic.

1. Expect it to happen. That doesn’t make us negative thinkers, mind you, but rather traders who are mentally prepared for anything – including the worst-case scenario.  After all, if we’re prepared to face the worst, what could possibly cause us to panic?  The point here is that through logical thinking as well as visualization, unexpected events and adverse moves can be mentally rehearsed to the point that when it does happen, we’re focused on the solution rather than the problem.

2. Keep a level head. By doing #1, we’re freed up to maintain our wits.  Throwing a temper tantrum or freezing up entirely is only going to make it worse.  The deer in the headlights stands motionless (at least here in south Texas), which means it’s up to the car to change course if something awful is to be avoided.  Don’t be the deer – you can’t base your protection on hope that the stock will change course for you.  Cooler heads will always prevail, so exercise self-control when you find yourself in a sticky situation and your mind will be available to strategize.

3. Expect to survive. Trusting that you’ll be alright in the long haul will help keep things in perspective [1], just as they should be.  What might feel like a catastrophe to the inexperienced trader might be a little unsettling to you, which is something you can absolutely recover from.  At the worst, it’s one bad trade out of your next 1000 trades, so consider it a spot on the windshield to look beyond rather than something worthy of doing more damage to you than it already has.

4. Never allow one trade to be too important. This of course takes into account position sizing and position risk, because the financial hit is the one that comes first.  Putting on trades which are larger than they should be is nice when they work, but when they don’t, look out.  Staring at a loss which is bigger than you’ve faced before will bring instant regret.  Similarly, trading within one’s limits also means that no trade is ever emotionally too important.  The aftermath which follows a big loss [2] can be more emotional than financial, so walk the line carefully when choosing position size, and you’ll avoid a tailspin.

The market will dish out surprises from time to time, no doubt about it.  Train yourself to expect it, and mentally rehearse some ways you’ll respond when it happens. You’ll ultimately feel as though you’ve been there, and your second reaction (following ‘oops’) will be a remedy rather than crippling [3] anxiety and fear.