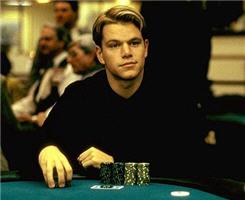 I love the movie Rounders, in which Matt Damon is a poker player looking for a big break (and then a way to get out of some serious trouble).

In the movie, his character Mike McDermott makes a comment early on that as a player, “your goal is to win one big bet an hour – that’s it.”

Notice he said “win one big bet” rather than “place one big bet.”  There’s a key distinction here and it applies to trading.

Amateurs too often think they need to place some big bets in order to win big.  They couldn’t be farther from the truth.

Amateurs are also generally too proud to fold.  That’s admitting defeat, and rather than seeing the bigger picture of losing some battles in order to win the war, they take a stand when they shouldn’t – and they pay for it.

How the Pro’s Play

Professional traders, on the other hand, realize there’s plenty of quiet time to endure before those payout opportunities occur.  They realize it’s a matter of hanging around, staying in the game, in order to be fit to capitalize on the best “hands” they are dealt.

Professionals understand that taking small hit after small hit is easily undone by just a win or two – so long as they’re losing smaller [1] and winning bigger. Be willing to fold [2] repeatedly if necessary – the goal is to be net profitable, but that won’t happen every single time you commit your capital.

Trading is a numbers game, and professionals only play (or play for meaningful stakes [3]) when conditions are most favorable.  Very simple, but very difficult for many amateurs to do.

So the question is… are you thinking (and acting) more like an amateur or a pro?
(Hint: your results are likely already reflecting it.)

Get our free newsletter [5] to keep up!
Follow @TheStockBandit [6]